Note this is what causes the Crystal in your pineal gland to vibrate and open up portals into dimensions to tap your psychic gifts. 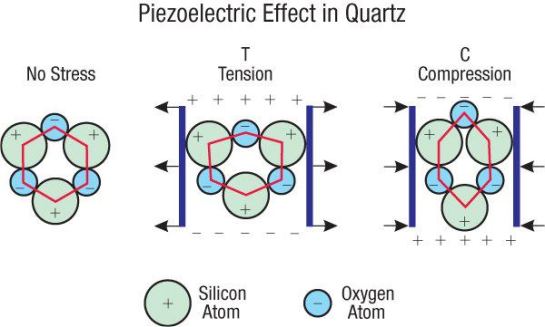 Piezoelectricity is the charge that is generated when two materials are compressed together. The question is how do they buzz, and more importantly, why? The how is easy enough to explain.Piezoelectricity is the charge that accumulates in certain solid materials (notably crystals, certain ceramics, and biological matter such as bone, DNA and various proteins) in response to applied mechanical stress. The word piezoelectricity means electricity resulting from pressure. It is derived from the Greek piezo or piezein , which means to squeeze or press, and electric or electron, which stands for amber, an ancient source of electric charge.

This very exciting phenomenon regarding was discovered back in 1880 by French physicists Jacques and Pierre Curie. And before you even have a chance to ask—YES, YES, YES, it’s the same Pierre Curie who was married to one of the most famous Grande Dame Babes in Babe-ville, Marie Curie.

Now, remember, piezoelectricity is rampant. It’s everywhere we look and everywhere we touch. It’s not some ancient, dark, mystic, secret that is exclusively owned and guarded by some Holy Order of the 33rd Degree Bloodline Dragonfly Sect (or whatever other secret society you wish to name). Quite a number of materials, both natural and synthetic exhibit piezoelectricity.

However, it is one thing to be able to generate piezoelectricity and quite another to tune in and to understand exactly what is being transmitted. What most of these materials lack is the eyes and the brain connection with which to receive and to interpret the signals. They can receive and vibrate waves forever, and nothing will ever come of all the waves that are given off by all these materials.

Lucky for us, we have the necessary eyes and brain to be able to intelligently look at and interpret the waves for ourselves. Notice that bone is one of the materials that has piezoelectric properties. It so happens (surprise!) that those unusual calcified deposits floating around in the pineal gland are chemically similar to bone mineral.

In the presence of a magnetic field, these calcifications contract and expand, causing them to turn into sound waves, hence the buzzing or humming sound we hear when our pineal gland is activated. The sound waves are then turned into electrical currents, and even light, which is then picked up as visual images by the pineal gland.

What Is Piezoelectricity: Part 1