The term ‘self-healed’ in this context refers to a quartz crystal that has healed or grown again after having endured fracturing or other damage due to tectonic movement or rapid temperature change during its formative phase.

There are several sub-genres of self-healed quartz crystals, the most common of which being “regrown”. Self-healed crystals of a more rare variety may appear curved or otherwise deformed due to breakage and subsequent healing, similar to a broken bone that did not properly set as it healed. Quartz crystals that display advanced-stage regrowth on the end where they were formerly attached to a cluster or wall of the pocket have been aptly named “Regrown Floater”. These special crystals break off and are set free to float in the silica-rich solution of the hydrothermal pocket where they actually begin to grow again, leaving visible impressions of this process on the surface the stone.

Certain high-altitude localities in the Himalayas have been found to be unusually abundant in the this rare signature quartz formation, so sought after by practitioners of the the healing arts. Distinctive in form, these Himalayan self-healed crystals, whether bent, scarred, deformed or regrown in fascinating patterns are important tools for use in crystal healing practice. 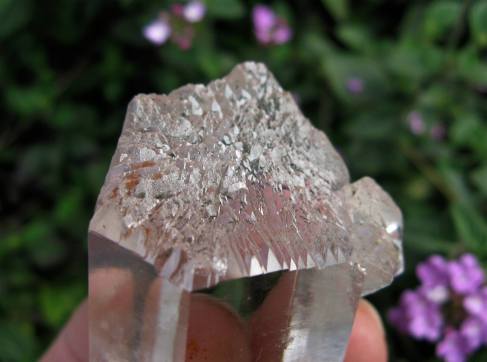